My first problem with the word "scalable" is that most of the time it is used without the user even being aware of what it actually means. Wikipedia, citing a definition from another source[1], describes scalability as being "a desirable property of a system, a network, or a process, which indicates its ability to either handle growing amounts of work in a graceful manner, or to be readily enlarged." That sounds great, but how does that translate in the real world?

Well, imagine that we have some sort of "system" - this could be any sort of system: anything from an application to handle withdrawals from cash machines (ATMs), to a billing system for a telecoms company. Taking the first example, suppose our system can handle 1000 withdrawals per minute. If the system were scalable, then it would be possible to increase the number of withdrawals per minute that it can handle, simply by increasing a "resource". There are many things that can be considered a resource (and more on that below), but the usual ones are: memory, the number of processors (CPUs), network bandwidth etc.

Why would anyone want to be able to do this? There are a number of reasons why a scalable system might be desirable; here are a couple of them:

So now that we have an idea of what it means, what are my other issues with the word "scalable"? Well the second and third issues are related: many people don't understand exactly what is involved with building a scalable system, and in fact they don't actually need such a system - what they actually want is a system that is fast enough.

To illustrate these two points, let's look at some very basic theory - a grossly simplified conceptual "system". The system consists of a load balancer, which splits incoming work packets between one or more processing units, and these actually do the work. For the purposes of this discussion, it doesn't really matter what the work packets are, just think of them as representing some abstract unit of work.

Each processing unit can process a maximum of 1000 work packets per minute. 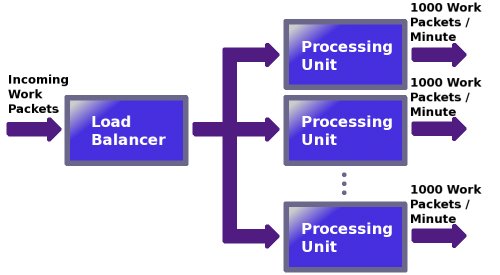 Unfortunately, as I'm sure you've spotted, there is a problem with this nice simple scalable system, and that is the load balancer. For this system to be perfectly scalable forever, the load balancer would need to be able to handle an infinite number of work packets per minute. I don't know about you, but if I had invented such a component, then I would be very rich, and currently not one bit interested in scalable systems, but instead sipping cocktails on a beach somewhere in the Caribbean!

Eventually we come to a point where we get diminishing returns: we find that adding another processing unit yields so little performance improvement that it is simply not worth the cost. Indeed, we may even get to the point where adding resources actually makes the overall performance worse, simply because there is so much contention.

"Ah", we hear you cry. "Why not increase the number of load balancers as well?" Unfortunately, all that does is move the problem up the chain. There is always a shared resource. In fact, if there were no shared resource, it wouldn't be a single system at all. There are lots of resources that may be shared in any system; here are a few examples:

So, what can we do about it? Well it should be easy to see that if the shared resources are placing an upper limit on the capacity of our system, then it's those we need to concentrate on. So going back to our example, if we want our system to scale up to 10,000 work packets a minute, then we need to make sure that our load balancer can handle that amount of work.

But hang on a second. Can you see what we've just done? We've now set an upper-limit on the performance of our system, at 10,000 work packets a minute. Wasn't the whole point of a scalable system that we didn't want to do that? Therein lies the problem, and you can probably now see why I hate it when people use the word "scalable" without thinking about it. The 'architect' of the system has placed a limit on the capacity of their system, whether they intended to or not.

I use the term "architect" loosely here, because those of you who have worked in IT for a while will know that quite often these sorts of decisions are not always made by a technically proficient architect, but quite often by those who do not appreciate their implications: managers, project managers, or even non-technical business users. Don't even get me started about how very few projects even test whether their system can actually handle the full load that has been predicted, or that most of these predictions are little better than if they had simply thrown a dart at a series of numbers on a piece of paper.

Even if systems are built with scalability in mind, few people bother to test whether their systems scale as intended. Wouldn't it just be a better idea to make the system fast enough? If you know that your upper limit is going to be 10,000 work packets per minute, why not just drop any pretence that the system has been or will be designed to be scalable, and just aim for the full capacity - develop a "processing unit" that can handle 10,000 work packets per minute?

The next time you're in a design meeting, and someone mentions that a system needs to be scalable, ask them what they actually mean, and then question whether it's really what they want.

To receive updates, and to get your free guide: